Skip to content
Previous Next
Children who need to move whilst listening. Why Forest School is so effective for Children with ADD

It’s not just children with ADD who like to move and listen.

Children with ADD of the Primarily Hyperactive-Impulsive Type often find it difficult to sit still and listen. However, if you teach early years you’ll know that most children struggle to sit still and just listen for long periods. There’s a neurological reason for this; we’re essentially hard-wired to listen and move at the same time!

Focus on listening rather than stillness

When I started facilitating Forest School, I would often slip into my previous role as a class teacher. I expected kids to sit still and listen whilst establishing boundaries for the session around the fire circle. I went on a Forest School development trip to Finland. Here, I noticed that children from Kindergarten to Year 6 fiddle or jiggle as they listen in class. Finnish teachers accept that many children learn better with the freedom to move.

So now, rather than checking stillness, I check understanding. Instead of briefing kids sitting still at the fire circle, I establish boundaries, whilst we are standing in the woods ready to start the activity.

Long term Forest School programmes give children time to adapt to this change in behaviour management. Children conditioned to being told to be still and quiet, tend to move around shouting, as soon as this instruction ceases. Once they understand the new expectation of just listening and understanding, their ability to self-moderate is impressive. As you can imagine, it’s a relief not to have to constantly be on a child’s case just because they’re wriggling.

Children, labelled unable to focus in a classroom, whittle a stick with complete concentration for over an hour at Forest School. Having the space to move is integral to Forest School and plays a key part in this newfound ability to focus and complete a task.

A research article published in “Pediatrics” in September 2014 demonstrated that children who move their bodies extensively and frequently are better at paying attention and have better abilities for impulse control, decision making, and problem-solving. This is different from the more traditional view that if children learn to sit still, they will be better students. The vestibular system is a sensory system which includes the inner ear and sends the brain information about motion, head position, and spatial orientation. It helps us keep our balance, stabilize our head and body during movement, and maintain posture. It even helps us focus our eyes on moving objects. Children who are spatially aware, tend to feel more confident and secure. This make it easier to absorb new information.  Developing children’s vestibular system through outdoor play such as climbing ropes and trees, stepping stones helps their learning. 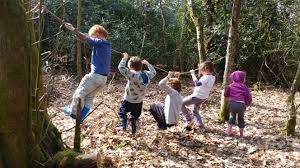